This was the first exchange between locals, my girlfriend and I as we arrived in the small South Carolinian town of Myrtle Beach via a quick WestJet flight. We were greeted with stereotypical southern hospitality almost immediately in Myrtle’s newly renovated airport – where any trip to the Grand Strand should begin.

The airport is bright and clean – a sign of its $100 million renovation project that began in 2011 – and upon exiting, we were greeted by palm trees and warm, salty air. 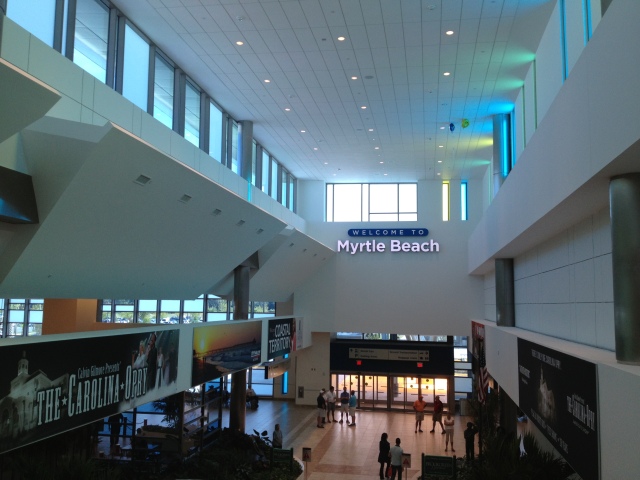 I’ve been playing golf for nearly my entire life, and living in Canada you’d think there would have been some opportunity to escape the snow and replace it with sand. But alas, it just never happened. I never had the chance to visit the number one golf destination in the world.

I finally journeyed to the famed vacation location in mid-October with my girlfriend alongside – who was easily swayed by the notion of swapping scarves for sandals.

Besides the aforementioned WestJet, Porter also flies to Myrtle Beach from the Toronto Island. Both operators only offer seasonal flights – ending in October – but give Canadian travellers ample time during the year to venture south. 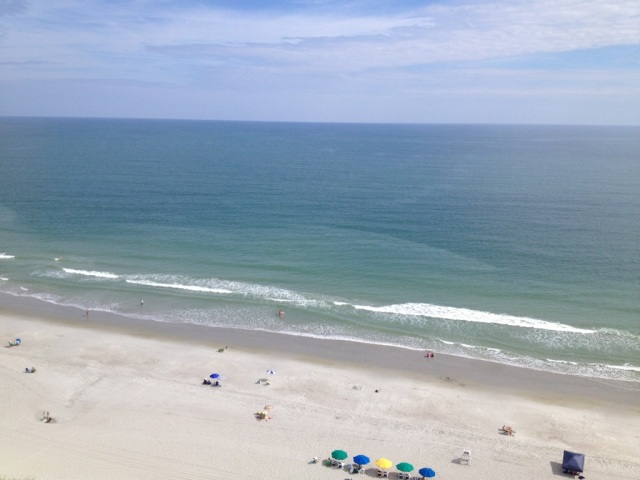 It’s hard to ignore how golf-mad Myrtle Beach is. There are 92 courses in the area, and the town’s population is just north of 30,000, giving the area the distinction of having one of the highest golf course-to-population ratings in the world. The number of golf courses is staggering, but this fiery competition gives travellers so many affordable options. I played two fine courses that were both in impeccable shape.

First was the Witch Golf Links, which is part of the Mystical Golf family (five courses total) and requires golfers to traverse through a Carolinian forest. It called for precise shot making, but was also forgiving enough for those just looking to have fun. The standout hole was the par-3 7th, with water up the right side of the hole and across the front of the green. The green is almost on an island, so beware of the alligators (a first for me) if you do drop your tee shot in the pond. 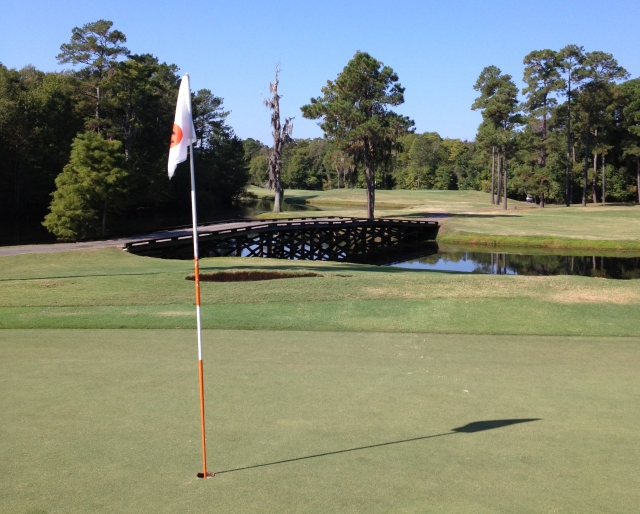 Playing Glen Dornoch, the second course on my itinerary, was also a treat. It’s part of the Glens Golf Group (four courses total) and is adjacent to the Intercostal Waterway – a feature that makes both the par-4 9th and par-4 18th truly memorable (and difficult) holes. The final three holes at Glen Dornoch claim to be the most-talked about in Myrtle Beach. After playing them, it’s tough to argue with that notion. Costal golf courses in South Carolina are usually flat, but this site challenges that. There are several natural elevation changes that slope down towards the aforementioned waterway. Both courses are less than 30 minutes from the boardwalk.

The boardwalk is really where Myrtle Beach shines. Beachfront activities are endless: waterparks, grandiose miniature golf courses, arcades, restaurants, fishing, sightseeing, shopping, beachcombing and museums are at your disposal. However, you’d be missing a key element of the Myrtle Beach experience if you didn’t see it from above.

The new SkyWheel allows visitors to do just that. The new attraction is situated right on the boardwalk, adjacent to the Landshark bar and grill – part of Jimmy Buffet’s Margaritaville franchise. The SkyWheel is a 200-foot-high Ferris wheel-style ride complete with gondola seating and gives riders a full view of the ocean and the boardwalk strip. My girlfriend and I rode it at sunset before dinner, but at night, it features a lights show with 1 million LED lights. 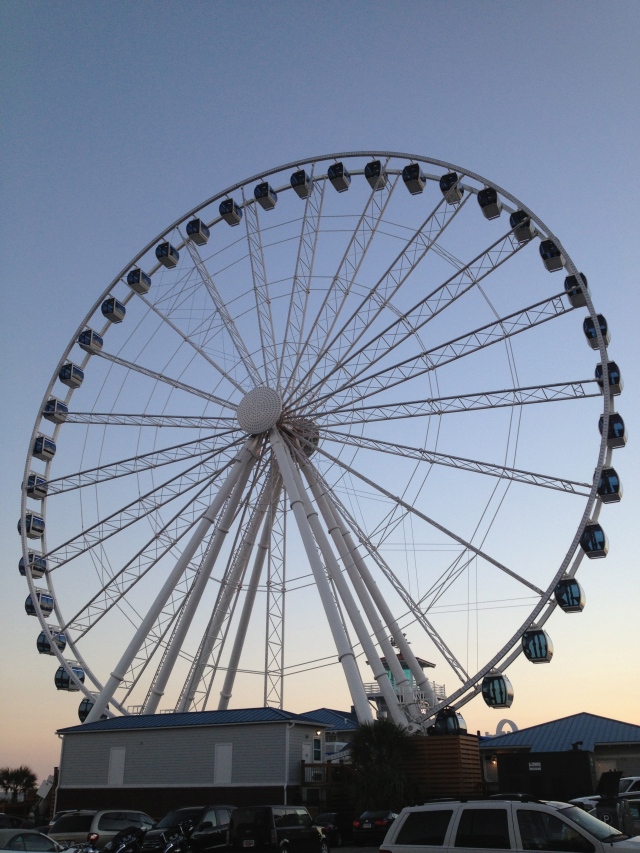 We thought the SkyWheel allowed us to capture beautiful panorama views of the Grand Strand, but its vastness and picturesque aesthetic was not fully clear until the next day, when we hovered above it.

Ocean Watersports – run by the outgoing manager, Jim – allowed us to experience the landscape of Myrtle Beach from a parasail 300 feet above the ocean. After being transported to the parasailing boat from the shore via an unexpectedly thrilling banana boat ride, we were strapped into a harness in front of a giant, colourful parachute. Then, as the boat pulled away, we were hoisted up in the air to our spectacular summit in the sky.

Ocean Watersports, as the number one watersports company in the region, usually opens in mid-March thanks to some persistent Canadians, Jim said, who convinced him to open early after explaining the timing of our March Break. Offering jet-ski rentals, longer banana boat rides and, of course, the parasailing, this is one unique opportunity a Myrtle Beach trip wouldn’t be complete without. 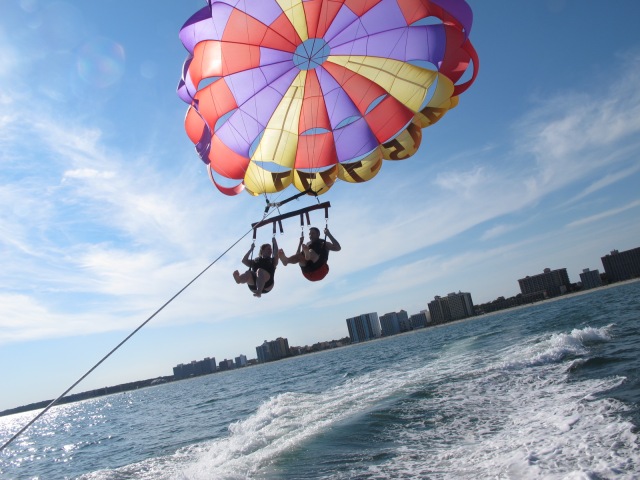 Finally, I’d be remiss not to mention the dining and nightlife in Myrtle Beach. There is no shortage of buffets (pronounced by some in the same way as Jimmy Buffet’s name, which was hilarious to hear), fresh seafood joints, ice cream parlours and – to our surprise – an astonishing number of pancake houses. There were of course, the typical chains like Chick-Fil-A, Olive Garden and TGI Fridays, but we perused local gems on the beach instead.

Our favourite meal was enjoyed at the Sea Captain’s House on Ocean Boulevard, where we indulged on succulent crab cakes, crisp salads, spicy jambalaya, pecan-encrusted snapper and house-made key lime pie. I can’t forget to mention the inexpensive beers on tap, either.

As part of the entertainment offerings, we enjoyed a fun evening of comedy thanks to the troupe at Carolina Improv whose take on Whose Line is it Anyway skits left us grinning ear-to-ear. The stage is located in a shopping mall, but the small space delivered big laughs for the sold-out crowd.

If Myrtle Beach is trying to shed its past image of being purely a golf destination, then it’s doing a strong job so far. It’s hard to deny that golf is the focal point, but between the sand and surf, the dining and the entertaining activities, the there’s much more to Myrtle Beach than “y’all” may think. 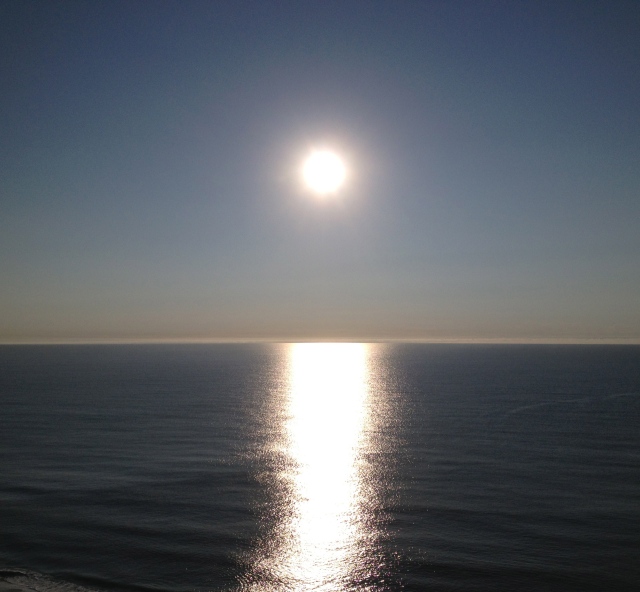