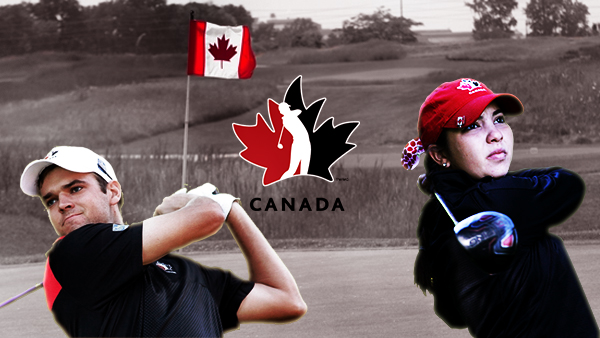 Golf Canada has named its 2015 National and Development Team through a press release distributed to Canadian media Thursday morning at 10 a.m.

The team, now in its 9th year, will be comprised of 19 young men and women from across Canada (10 males, nine females) and will once again be coached by Tristan Mullally and Derek Ingram.

On the men’s side, the National team is led by returning players Corey Conners and Adam Svensson. Conners, who was the U.S. Amateur runner-up earlier in 2014 could have turned professional this year (along with former Team Canada members Chris Hemmerich and Taylor Pendrith) but Conners must remain an amateur if he would like to participate in The Masters next year – part of the ‘prize’ for his top-two finish at the U.S. Amateur.

Meanwhile, Svensson returned to Barry University in September for his third year there. He won seven times in the NCAA DII circuit last year and will remain an amateur for the immediate future. He may turn professional next summer, but this remains to be seen.

Svensson and Conners will be joined by two new teammates: Blair Hamilton, 21, and Austin Connelly, 18. Hamilton is a third-year student at the University of Houston, while Connelly just signed a letter of intent to play at the University of Arkansas. Connelly, a dual-citizen, is ranked no.18 on the Official World Golf Ranking, and had to forfeit participation in team competitions for the U.S. (including a likely Walker Cup berth) in order to participate in Team Canada. According to a Golf Canada source, Connelly felt joining Team Canada was the best move for his career moving forward.

On the women’s side, it’s probably who isn’t on the team that will make more headlines than who is on the team.

Notable names that are absent include Augusta James and Brooke Henderson. All eyes are on Henderson as she decides what to do with her golfing future.

She told me earlier in 2014 that she wanted to continue down her path of education and attend the University of Florida (she verbally committed to them in the summer), but our conversation happened before she had, arguably, one of the best seasons in Canadian women’s golf ever, and rose to no.1 in the Official World Amateur Ranking.

A source with IMG – the agency that is rumoured to have signed Henderson – told me they don’t have “anything to share regarding Brooke,” but, there have been rumblings from other sources that this is a done deal. She’s rumoured to be completing school at Christmas and will turn professional not long after that.

Brittany Marchand and Jennifer Ha are the two golfers who are returning on the women’s side.

“We are very excited about the group of young men and women selected as members of Team Canada for 2015,” said Jeff Thompson, Golf Canada’s Chief Sport Officer. “It is at the very core of what we do; supporting, developing and nurturing Canada’s future stars of the sport.”

Here’s the full list of players who will be joining Team Canada:

There was an error retrieving images from Instagram. An attempt will be remade in a few minutes.